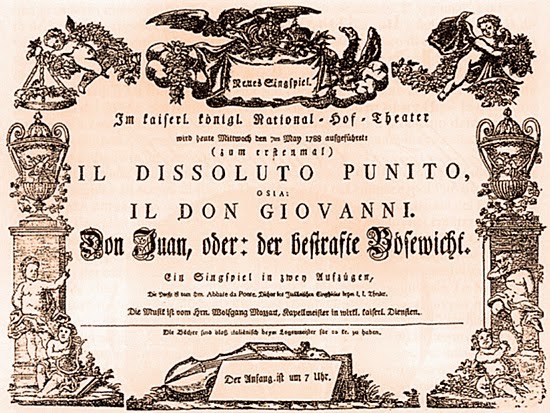 Although we don’t know the exact date of Mozart’s arrival in Prague for the production of Don Giovanni, we do know that he was actively involved in shaping the libretto and the staging. His first letter from Prague, dated August 24, 1787, suggests that he had already spent some time in the city, though scholars offer different interpretations of the production timeline. Da Ponte’s account suggests that he had completed the libretto in June of that year. Many legends surround the origins ofDon Giovanni, one of which claims that it was based on Mozart’s own numerous affairs with female singers. While rehearsing the opera in Prague, Mozart found that, “the company here is not as skilled as the Viennese in studying such an opera in so short a time.” The accounts of the rehearsals shed light not just on the activities specifically involved in producing Don Giovanni, but on the entire process of opera-making during the era. Luigi Bassi, a 22-year-old Italian singer who starred in the title role as the philandering libertine, complained that he had no big arias to sing, so Mozart, the story goes, wrote five different versions of the duet, “Là ci darem la mano” before the singer was content. Caterina Bondini, who sang the role of Zerlina, was unable to make the famous scream in the first Finale, which prompted Mozart to seize her unexpectedly until she did scream.

The first performance was scheduled for October 1, a gala occasion in honor of Prince Anton of Saxony and the Archduchess Maria Theresa, a sister of Joseph II, who were traveling through Prague while on their honeymoon. But the opera needed more rehearsal time, as Mozart was simultaneously involved in directing The Marriage of Figaro. In his letters home, Mozart blames the postponement on the “lazy singers” who “refuse to rehearse on opera days and the manager, who is anxious and timid, [and who] will not force them . . .” Eventually, the opera was scheduled to open on October 29, with Mozart reportedly completing the overture the night of the first performance (though some scholars argue that it was two nights before the opening).

All of the drama and efforts, however, were well worth it, because the opening night was a great success. A newspaper, Die Oberpostamtszeitung, wrote enthusiastically:

On Monday 29th the Italian opera company in Prague performed the eagerly-awaited opera by Maestro Mozart, Don Giovanni, or The Stone Guest. Connoisseurs and musicians say that nothing like it has ever been heard in Prague. Mr. Mozart himself conducted, and was greeted with repeated cheers as he came into the pit. The opera is, incidentally, extremely difficult, and everyone admired the fine performances after so short a rehearsal period. Theatre and orchestra did everything in their power for Mozart as a token of gratitude. A good deal of money had to be spent on the chorus and the décor, which was provided in excellent style by Mr. Guardasoni. The extraordinarily large audience was an indication of the general approval.

Mozart returned to Vienna by mid-November. During his absence, Salieri had asserted his dominance over the Viennese musical scene, so chances for Don Giovanni to be performed right away were rather slim.

Don Giovanni was eventually staged on May 7, 1788, at the Burghtheater, by the order of Joseph II. Da Ponte was paid 100 florins, and Mozart, 225. The success that the opera enjoyed in Prague didn’t materialize immediately in Vienna. The critics remained lukewarm, and the general consensus was that the opera had some kind of fault in it. In response, Mozart made a number of rewrites: a few arias were altered, two were cut, and three newly-composed pieces were added. Still, it took a long time for Vienna to accept Mozart’s masterpiece. The next performance took place in Leipzig on June 15, with the original cast from the Prague production and under the direction of Guardasoni. In 1789, the opera was produced in Mainz. Although opera-goers were still wary of the story (“The music pleased the experts greatly; the action did not,” October 13), they embraced Mozart’s music. Johann Friedrich Schink wrote enthusiastically:

Is this splendid, majestic and vigorous music really the stuff for the ordinary opera-goers, who take their ears to the theatre but leave their hearts at home? What is beautiful, grand and noble in the Don Giovanni score will everywhere be obvious to a minority of chosen people. It is not music to everybody’s taste, tickling the ear and starving the heart—Mozart is no ordinary composer. Every note is felt and transformed into feeling. His expressiveness is glowing, lively and picturesque, without becoming excessive or self-indulgent. His imagination is at the same time both rich and controlled.