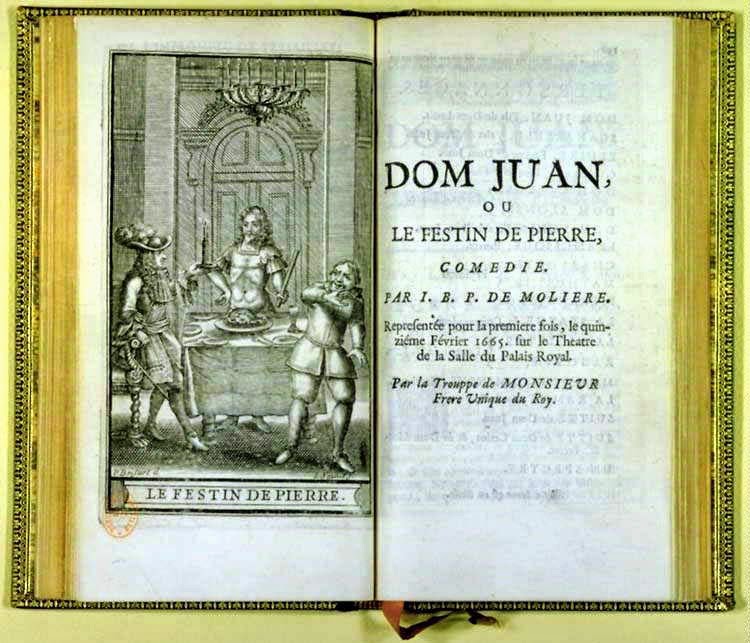 The origins of the Don Giovanni legend reach back to the Middle Ages, but the character didn’t become fully fleshed out until the Renaissance, when it first appeared in the 1630 comedy, El Burlador de Sevilla y convidado de pietra, by the monk Tirso de Molina (although modern scholars have contested his authorship of the play). In this first written incarnation, when faced with the vision of Hell, Don Giovanni does eventually ask for a priest in an attempt to repent, though it is too late, and it is difficult to say what his motives are (does he genuinely feel remorseful or is he only pretending?). Modern scholars believe that Molina’s text was modeled on the story of a certain Count Leonzio who was described in a Counter-Reformation document as an unscrupulous disbeliever. In the writings of the theologian Paul Zehentner, we can find a description of a theatrical performance in which, “Leonzio, like Hamlet, apostrophizes a skull and defies him, inviting him mockingly to a banquet to entertain his dinner guest with a debate over whether the mortal bodies of men enclose an immortal soul; unexpectedly, the skeleton appears at the banquet and drags away the scoffer to eternal punishment” (quoted in Pirrotta 12).

The next version of the story, under the title Convitato di pietra, rappresentazione in prosa, by Onofrio Giliberti, was published in 1652, but because it was lost, we know little about it other than that it was written as a piece of commedia dell’arte. Andrea Perrucci’s 1678 treatment of the story is also lost. Commedia dell’arte troupes traveled extensively throughout Europe during that time, enjoying particular success in France. Thus, it is not surprising that from Italy, the story next traveled to France, where it got its first two treatments, both titled Le Festin de Pierre ou le Fils Criminal, and both also in the style of commedia, by Dorimond (1658) and de Villiers (1659). The most important French version of the story from the era is, of course, Molière’s Dom Juan ou le Festin de Pierre, which first opened at the Théâtre du Palais Royal on February 15, 1665. Molière’s Dom Juan is a rational creature, quick-witted and charming but without passion. He not only blasphemes but goes even further, denying the very existence of God, and thus any moral system to live by. At the end of the play, he is confronted by a veiled woman, who makes the final judgment and reveals herself to be an incarnation of Time (with scythe). Scholar David Whitton notes that Molière’s Dom Juan is endowed “with a powerful intellect” which:

… allows him justify his actions in terms of a systematic programme of rational free-thinking. Dom Juan, unlike his real-life counterparts who dabbled in Epicurianism and materialistic skepticism, may simply be using his professed philosophy as a convenient cloak for a selfish way of life.  But by treating the subject at the level of philosophical debate, Molière makes the play into a provocative blend of social satire and metaphysical speculation.

The play was so controversial that it was only performed 15 times in 1665, and it wasn’t published until after Molière’s death, in his Oeuvres in 1682. Thomas Corneille’s 1677 adaptation eliminated the controversial ending, and the original Molière version wasn’t staged in full until 1841 at the Odéon, and in 1847 at the Théâtre Français. Following Molière’s production, Claude de La Rose, who was also known by the name Rosimond, and who acted in the rival company to Molière’s,  staged his own version in 1669, titled The New Stone Guest, or The Atheist Struck by Lighting. Rosimond’s comedy focused on Don Juan’s impiety and atheism.

Molière’s version of the libertine’s story became quite influential across Europe. Thomas Shadwell’s The Libertine, first performed in London in 1676, was among many versions based on Molière’s. In Germany, Johannes Velten’s translation, Don Juan oder Don Pedros Totengastmahl, initiated a lasting fascination with the character. Until 1772, Don Juan, or The Stone Guest was regularly performed in Vienna on All Souls’ Day. Numerous versions of the play, often in burlesque style, toured Europe, and many puppet plays were performed at the town markets, with titles like Don Juan, or the Quadruple Murderer, or the Midnight Banquet in the Cemetery. In Spain, a new version appeared in 1725, written by Antonio Zamora, and in Italy, Goldoni wrote his Don Giovanni Tenorio ossia il Dissoluto, which was performed in Venice in 1736. Many of these versions were quite popular, though questionable. Writing about one such travelling Italian production, Voltaire noted that “it was a great success at the improved theatre: no one rebelled against the monstrous collage of buffoonery and religion, of jesting and horror, nor against the eccentricities that formed the subject of this piece.”

Around the same time, the story crossed to the operatic stage. In 1713, Le Tellier’s three-act vaudeville comedy Le Festin de Pierre, en vaudevilles sans prose was performed at the Théâtre de la Foire Saint-Germain in Paris. Despite audience enthusiasm, the show was at first banned because of the representation of Hell in the finale. In Italy, Don Giovanni appeared first in the composer Eustachio Bambini’s 1734 farce opera, La pravità castigata, and in 1746, Colin Restier’s ballet Le grand Festin de Pierre was staged at the Théâtre de la Foire Saint-Laurent. The second ballet, Don Juan, with music by Gluck, was performed at the Vienna Karntnertortheater in 1761. By the 1770s, the Italian theatres were flooded withconvitati di pietra, many of which mixed serious and buffo elements. The Italian fascination with the Don Juan character reached its peak in 1787. Writing to one of his friends, Goethe noted that “an opera called Don Juan (not Mozart’s) was played every night for four weeks.”

These early representations of Don Giovanni’s story focused less on his womanizing than on his general display of impiety and disbelief, which inevitably must be punished with eternal damnation to Hell. The later productions, which were influenced by Restoration comedy, presented Don Giovanni’s womanizing in a more ambivalent light. The Restoration saw the boudoir as a place of war: of men against women, and vice versa. Men gained esteem and increased their reputation proportionate to the number of women they seduced, while women gained esteem according to how long they resisted. A woman’s virtue was a fortress to be conquered, and the theme of the fall of the virtuous woman and the progress of the libertine seducer (the rake) dominated most Restoration comedies, in which “the citizens continue to hunt down the gallants’ patrimonies; the gallants continue to hunt down the citizens’ wives” (Bruce 15). Sex and power was a game that only the most skillful could win.